Tax evasion via ‘offshore’ accounts is a problem for governments around the world. Automatic Exchange of Information (AEoI) reporting seeks to address this by requiring Financial Institutions to report details of their overseas accounts holders annually to the tax authorities, usually in eXtensible Markup Language (XML) format.

Automatic Exchange of Information is an umbrella term used to describe different reporting regimes, all of which have the same underlying principles. The reporting regimes currently under the umbrella of AEoI are FATCA and CRS.

Financial Institutions are required to put in place policies and procedures to identify financial accounts held by reportable persons and then on an annual basis file reports of these reportable accounts to the relevant tax authority. This data is then exchanged between the tax authorities to assist in monitoring tax compliance.

UK Bank Plc holds bank accounts for French resident individuals. By 31st May each year it is required to file a report (in .XML format) to HMRC (the UK tax authority) which details the names, addresses, French tax identification numbers and basic account details such as account number, balance at the previous 31st December and income for the year to December. HMRC then transfer this data to the French tax authority so that they can use this as a check that the individuals have properly declared their income and are paying the correct amount of tax.

In most cases this is a reciprocal process so, continuing the example above, French banks will identify their UK resident account holders, filing a similar report to the French tax authorities who, in turn, will exchange this information with HMRC in the UK.

This basic principle is replicated across many different countries and therefore thousands of information exchanges take place each year. 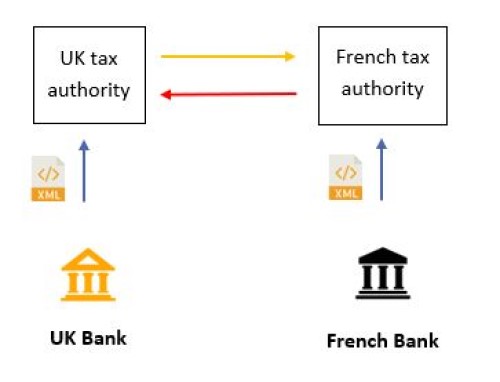 The Foreign Account Tax Compliance Act (FATCA) is US legislation, part of the 2010 Hiring Incentive to Restore Employment (HIRE) Act. The original intention of this legislation was that non-US Financial Institutions would agree to report details of their US account holders to the US tax authority, the Inland Revenue Service (IRS), in order that the IRS could then check that these US persons were correctly declaring their worldwide income for tax purposes.

The principle of transmitting details directly to the US would give rise to data protection issues so as an alternative over 100 jurisdictions to date have entered into Inter-Governmental Agreements (IGAs) with the US whereby the Financial Institutions report to the local tax authority who then in turn transmit this data to the IRS. For example, in the UK Financial Institutions submit details of their US resident account holders to HMRC who then transmit this data to the IRS. These are referred to as model 1 IGAs. A full list of IGAs currently in force is published on the US treasury website.

A small number of jurisdictions (currently 14) did not follow this model and instead Financial Institutions in these jurisdictions transmit their FATCA reports directly to the IRS. These are referred to as model 2 IGAs. The first FATCA reports were filed in 2015 in respect of reportable account details as at 31st December 2014.

Details of the reporting schema and associated user guides are published on the IRS website.

Whilst the practicalities of implementing US FATCA were being worked out, the Organisation for Economic Co-operation and Development (OECD) were also busy working on a global standard for Automatic Exchange of Information. In July 2014, the Standard for Automatic Exchange of Financial Account Information in Tax Matters was published, commonly referred to as the Common Reporting Standard (CRS). The CRS is largely based on FATCA and despite some differences, many of the requirements are identical.

The key difference between CRS and the other reporting regimes is that CRS applies in respect of account holders from many different jurisdictions (unlike FATCA which is only concerned with US account holders).

Note that the United States have not signed up to CRS and therefore the FATCA reporting regime continues in parallel, requiring Financial Institutions in most jurisdictions to submit separate FATCA and CRS reports.